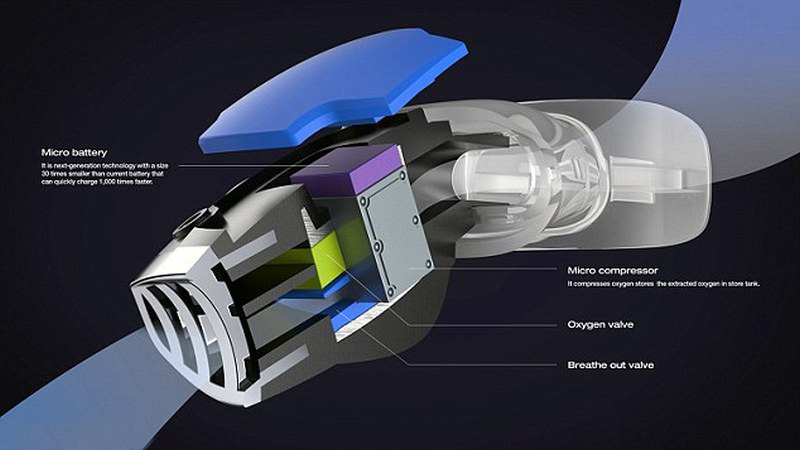 If an idea alone would give you rights to an invention, I’d be rich. I remember thinking, why don’t we just make an apparatus that has gills like the fish, so that we don’t need oxygen tanks? I was 5 when I first came up the the idea. Throughout my childhood, I had many dreams where I could breathe underwater – and I was sad when I awakened to our world where humans cannot breathe underwater. Fortunately I do not sleepwalk, else I may have found myself in the swimming pool upon wakening many times (or maybe just once, get it?)!

Life did not take me down that route toward bringing my idea into reality, but I was not the only one to consider the idea. I have found two companies which have claimed to actually either have created or that they are in the process of creating a device which will allow you to extract oxygen from the water like fish do, that is, artificial gills. The first one is by an Israeli company “LikeAFish“, whose mission is supposedly to create “revolutionary air supply systems that are able to extract air from water, for both the leisure and the professional scuba diving industries, as well as for submarines and underwater habitats”.

Has LikeAFish really created a workable model however? According to what I could gather, no, and in fact they are not exactly in the business of artificial gills, but rather in creating large machines designed to extract oxygen from water. Not exactly what I had in mind. They have the idea for one, which however includes an oxygen tank for storage of extracted gasses; however, it does not look like they have made any progress in creating a functional individual prototype.

The next invention I found is spot on my idea of breathing underwater like fish do, without an oxygen tank. It is called the “Triton” and claims to be a device which you can insert into your mouth and breath from the water. In fact, they have garnered almost a million dollars ($900,000) in support for research and development of the product, from multiple underwater explorers who would love to have one as much as I would. They had raised the funds through a very successful Indiegogo crowdfunding campaign.

Here the promo video for the Triton (Update: it is not real but still cool to watch):

However, does the Triton work? There is a picture of someone diving with one in his mouth, but it appears that no, the Triton is not a working model yet (and perhaps never will be). There are apparently many difficulties with doing this. The first problem is that humans cannot breathe pure oxygen. Well, we can, but we won’t remain conscious for long, and the last thing you want to do is go unconscious on a deep dive! That is pretty much a guaranteed death sentence. So not only does the device have to extract oxygen, but it also needs to extract it in an acceptable ratio to release into our lungs.

The air we breathe has about 21% oxygen and 78% nitrogen (1% are other inert gasses)[1]. That means for it to work it would also have to only give us 20% oxygen and 79% other inert gasses. This would be very challenging to do straight from seawater. Especially because seawater has about 4-8% oxygen, and about 10% to 12% nitrogen. Seawater has a much higher percentage of CO2, with up to 90% of seawater’s composition made of carbon dioxide[2]. You cannot use carbon dioxide instead of nitrogen, because humans will die if there is more than 50% composition of air breathed being CO2[3].

Because we can’t breathe CO2, that means the device not only has to extract a very large amount of oxygen, since we need about 20% but seawater only has 4% to 8% O2; but also it has to extract an even greater amount of nitrogen, since seawater has only 10% to 12% nitrogen but we need it to compose almost 80% of the usable gas for breathing. Worse, it also means that the device needs to specifically filter out the up to 90% CO2 so that gas isn’t a part of the extracted gas for breathing, or else it could result in death, either directly from CO2 poisoning or indirectly through losing consciousness and drowning. 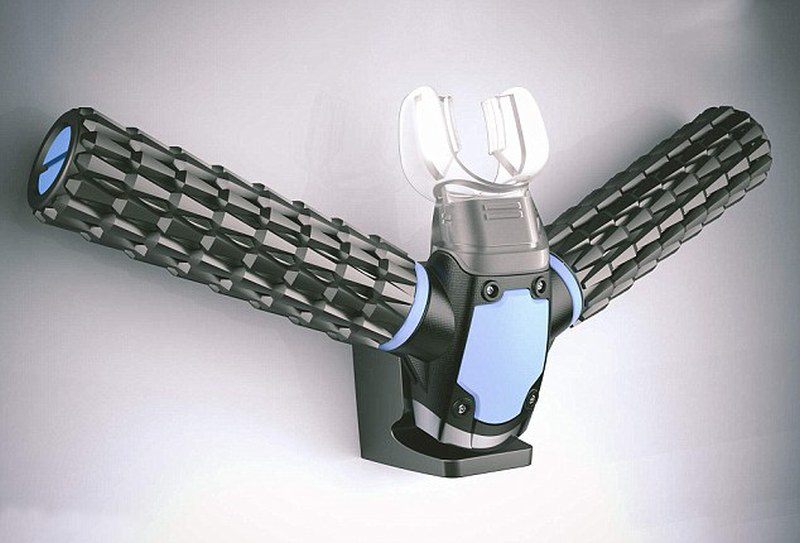 This presents a very real problem for a small, lightweight device you can insert into your mouth and simply breathe. This is because it would require sucking in and ejecting very large quantities of water at a very fast rate in order to extract the necessary percentages of oxygen and nitrogen. Since nitrogen is even less of a relative percentage to oxygen, then we won’t be able to directly pump through and use all the oxygen, unless there was some sort of storage chamber for excess oxygen (which would significantly increase the size of the device). However, to achieve near 80% of nitrogen percentage, we would need to suck in and eject the water like a fire hose to take 10% nitrogen in the water and use it as 80% of the breathable gas.

Also we would need to store these gasses in some kind of chamber or have a very efficient delivery method. And by very efficient I mean very fast. This brings me to the next problem which is that humans breathe a large volume of air for each breath. This means the device has to work even harder to achieve the quantity of air needed to breathe. I can imagine that for such a device to work you would essentially have a giant whirlpool in front of your face with each breath for the device to suck and and eject the water fast enough to extract the quantity of oxygen and nitrogen needed to live.

Or, the device would have to be very, very big. For example, a shark, which is at least as large as a human, can breathe the low oxygen percentage in water because its gills have a lot of surface area allowing it to absorb very large quantities of oxygen for the water so it can survive. So it’s either a small device on your face sucking a giant whirlpool in front of your face with each breath, or it’s a very large device to have the adequate surface area (or very creatively designed device which maximizes surface area on a smaller device). 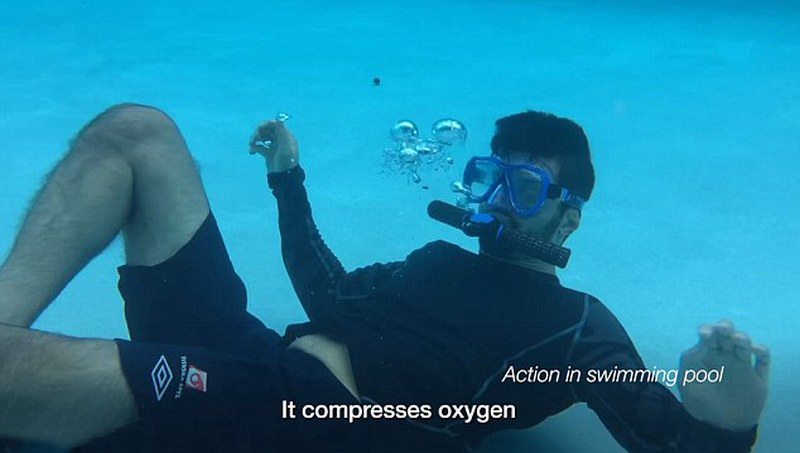 But still even with a very large device, there are many other challenges. One for example is having a very efficient filtration system to filter out harmful substances, ocean critters, bacteria and viruses (there are millions of viruses in every drop of seawater) and anything that could clog the filter. Unfortunately, water filtration technology just isn’t that far along yet. Not to mention the efficiency it would need for large quantities of water in a smaller device.

And how about metering the extracted gasses to deliver the right amount? Scuba gear has a large meter that performs this operation, but you would have to make one very small and it has to keep working! And how about waterproofing and battery life? The pumps would have to run off battery power and these pumps would need to be quite powerful, especially on a smaller device, to achieve the volume of gasses extracted from the water that is needed to breathe.

And these pumps will require a lot of power. And batteries are heavy. So essentially, it would require to be extremely efficient beyond current technology, or there would need to be a new technology for batteries that is far more powerful and far more lightweight – and we are decades if not centuries away from practically achieving this. Imagine being tossed overboard with a 200 pound battery! Sure, you can breathe at the bottom but you won’t be able to move and eventually you will starve to death. So power concerns are a real issue.

So will we have a functional, small, lightweight breather you can just put on like a scuba mask one day? Well, one day, sure, I believe that eventually if the world lasts long enough and we don’t have another dark ages then we will eventually have this. However, I don’t envision it anytime soon, and I am very dubious that the Triton will ever have a functional prototype. Not in this lifetime, anyway, without significant advances in technology – which, albeit, is certainly plausible! So let’s keep our hopes up!

Update: Triton researchers refunded all their funding for the device[4]. Apparently their device actually requires special liquid containers to use – so in fact it is not actually an artificial gill and never will be. If I were to guess I would speculate that they went into it with full intentions to make it, but when they came down to the science of it and available technology, they realized it simply is not feasible with today’s technology. And to salvage the project, I speculate that they decided to make a much inferior product that doesn’t do as they originally intended and is not in fact artificial gills.

However, I am hopeful that some day we will have one! If not in my lifetime, perhaps some day in the not-so-distant future.

What do you think? Would you buy one if it were available? I know I would!

2 thoughts on “What If You Could Breathe Underwater? Could An Artificial Gill Ever Be Created?”

The Truth About Cybersqatting, How To Get The Domain, And How To Fight Back