I was not prepared for how awesome this movie was when I sat down to watch it. It is likely to leave you in shock, awe, wonder, and tears. Tears of sadness, and tears of joy. The entire movie is intense, leaving you on the edge of your seat barely sparing a moment. This movie knocked me out of my seat, coming out of nowhere.

Whereas many other disaster movies like “Titanic” and “The Day After Tomorrow” seemed to have a lot of hype building up to it before release, I had none of that and was not ready for what I got. This movie is completely and utterly awesome. Perhaps it’s because I didn’t see any of the commercials leading up to it – I would highly recommend you do not watch any trailers either; I did not and the shock and wonder was part of what helped make this an amazing movie for me. Honestly, I think that the only people who really can’t enjoy this movie are people that are so totally disillusioned that they cannot participate in the most fundamental aspect of film and drama – suspension of disbelief. Which is in my opinion a tragedy in itself.

Moreover, I found the movie to actually be rather realistic in its depiction of the disasters that would occur. I think that some people just don’t have the imagination to realize how terrible and dramatic an earthquake of this magnitude will have. I say will have, because unlike “The Day After Tomorrow” which is a total stretch, this movie is based on solid fact – this kind of earthquake can and will happen here in California, although there is no telling if it will be the magnitude in the movie, but scientifically it is very possible and even likely.

Sure, there are a couple elements which are vamped up for dramatic effect, such as the fault line itself opening up; but this is Hollywood and I would expect nothing else. What people don’t realize, is that without exaggeration and additional dramatic effect, it would not be possible to make the audience feel anything close to what they would feel if this really happened. Thus, these dramatic exaggerations are completely and totally warranted and even necessary for the making of a truly awesome movie. The screenwriters knew this.

Some of the scenes I am glad I was watching at home because you really have to pause and even rewind some of the scenes to truly appreciate the sheer and utter magnitude and scale of all that is going on. Most of the movie left me with my jaw dropped and my eyes frozen on the screen. It was absolutely fantastic, the action scenes were marvelous, teeth grinding, and awe inspiring, just like I love. It’s hard to describe some of what I love without giving away any spoilers, so I will leave you to see it for yourself.

As far as acting, I’m not a fan of The Rock normally, but I think he did an amazing job in this movie. On the other hand, I really love Carla Gugino who plays his estranged wife. She absolutely did not disappoint in this movie, providing as usual an absolutely stellar performance. I really thought she brought a lot of drama and depth. All in all, I thought the cast was stellar, and together brought the movie the dramatic effect it deserved. 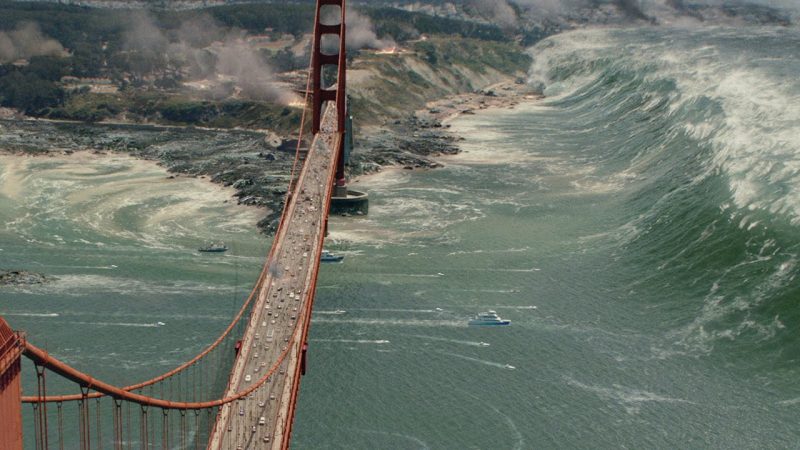 The special effects were absolutely fantastic, as should be expected at this age in movie history with all of the technological advances in media. In fact, the special effects were so great that I think the only reason some people might think it’s unrealistic like some reviews I read, would be because they confused their feelings of awe and wonder with false feelings of disbelief. I really think that the effects of this movie spectacularly and even accurately expressed the magnitude and wonder of such a dramatic natural disaster.

Further, I believe that the screenwriting was nothing less than a work of art. The writers perfectly composed a symphony of elements that perfectly touched both your mind and heart in a way that reaches into the very core of what matters in life. It felt like they were composing a beautiful song in the form of a movie and drama that touched my heart and made me cry in both sadness and joy. They perfectly orchestrated the final scenes to bring it to the perfect climax with one of the most wonderful and fulfilling endings I have ever seen, while at the same time showing the reality of what will happen one day when the Big One finally hits California.

Batman v Superman: Dawn of Justice Official Trailer | Who Will Win The Fight?

Movie Review: The Wolf of Wall Street, A Dark and Outrageous Comedy Based On A True Story