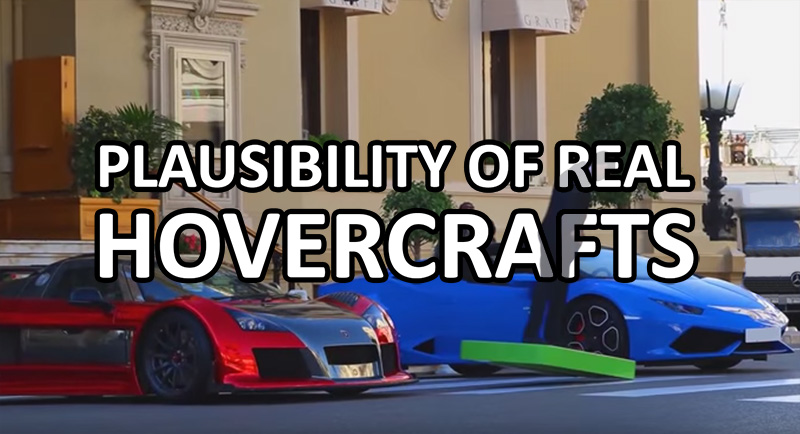 For decades scifi fans and tech lovers have dreamed of a real life, practical hoverboard. Since Back to the Future and Star Wars, dreams of using future hover technology have captured the imaginations of youth who would grow up to attempt to achieve such technology in real life.

Dreams of hoverboards, hoverbikes, hovercrafts, and floating flight have not been restricted to merely the world of science fiction. New means of flight have been continuously devised, developed, and tested, many with success. However, none have been developed yet which are quite as fantastical as a hovercraft levitating above the ground, without wheels, and without propellers or other traditional means of achieving lift.

The X34 Landspeeder Hovercraft from Star Wars sparked the imagination that helped to leads to dreams of real hoverboards. The illusion was created using wheels and a greenscreen to remove the wheels during video editing.

Most existing hovercrafts and hoverboards today are designed using lightweight frames on high-powered propellers which provide enough lift to raise a person off the ground. Multiple inventors have created working hoverboards and hoverbikes using traditional propeller-powered lift, the same technology which allows helicopters to fly – just the other way around (pushing down instead of lifting up). 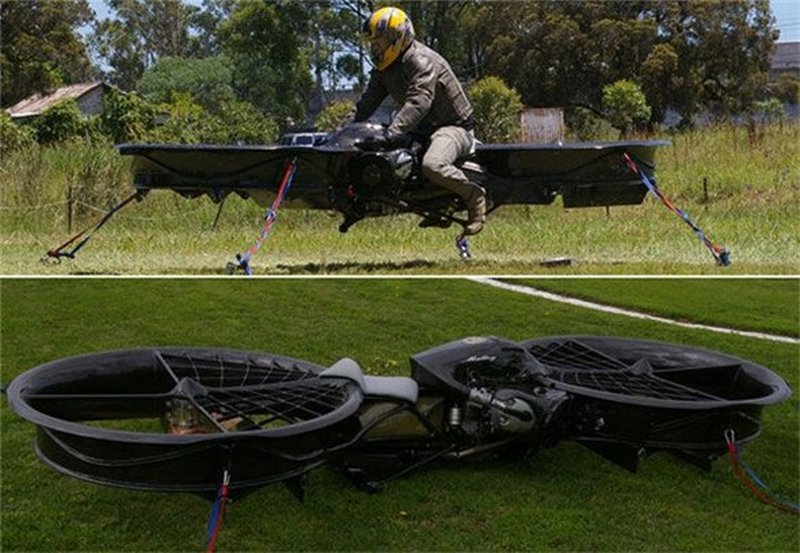 Electromagnetic levitation utilizes superconducting material cooled with liquid nitrogen paired with high-tech electromagnets on both the vehicle as well as the ground in order to work. It utilizes the basic repelling function of two magnets in order to achieve a stable lift in which there is a small layer of air beneath the board or device, so that the hoverboard is effectively floating on air.

Even Lexus has designed a superconducting electromagnetic levitation hoverboard cooled with liquid nitrogen. While this is cool and there is the possibility of building custom hoverboard parks, like a skate park, for which you could charge people to use it for recreation, it is still essentially a novelty item – and even far less useful or practical than rollerblades or actual skateboards.

It should be noted, however, that the Lexus hoverboard is original, and it did take a good deal of research and ingenuity. Certainly, it is effectively a real hoverboard, although not a practical hoverboard since it requires a track built into the ground in order to function. However, it is an impressive work of science. 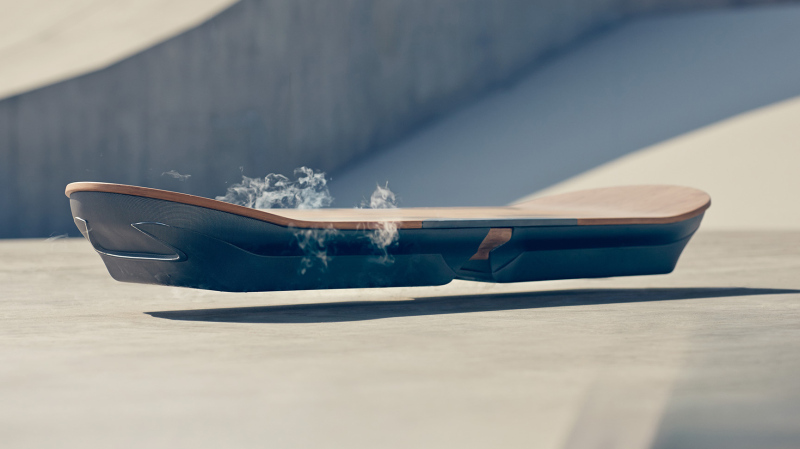 While the Lexus hoverboard is not practical, it certainly is impressive and is probably very fun to use. The visible smoke is real, it is caused by the liquid nitrogen used to cool the superconductor.

Additionally, you can’t exactly do any tricks or kickflips with a “maglev” (short for electromagnetic levitation) hoverboard, although I envision some sort of switching technology could potentially make it possible. While this is really cool to have Lexus working on real hoverboards, these aren’t really hoverboards just anyone can use.

Maglev technology just isn’t practical as a form of personal transportation. It is currently being used to power the fastest trains in the world, which literally levitate on a cushion of air, the high-speed maglev trains. Utilizing electromagnetic levitation and superconducting material, maglev trains can go hundreds of miles an hour. However, bringing this to personal transportation makes no sense, unless the entire earth was turned into one big electromagnet. 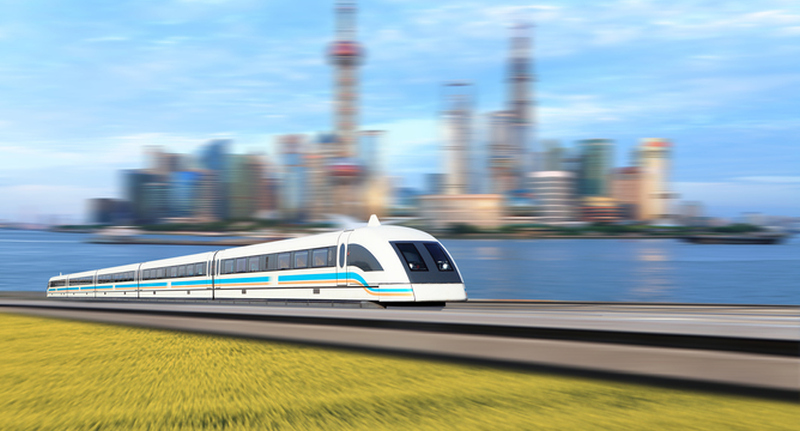 This maglev train utilizes the same superconductors and electromagnet system as is found in the Lexus hoverboard.

If electromagnetic technology, as it exists, and propeller-based technology are not viable means of hoverboard levitation, is there science that could make “real” hoverboards actually possible? Perhaps, although it could only be theoretical at this stage, to the extent of my own imagination combined with scientific research.

If this technology is ever developed, if it can even exist, then there will be no need for a track built into the ground, as this electromagnetic hoverboard could go anywhere and over any surface. 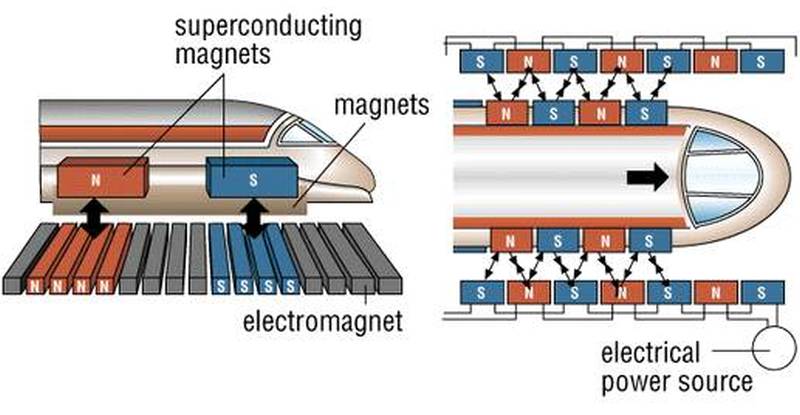 This is how today’s superconducting magnetic levitation trains work.

Antigravity is certainly another possibility, but even the existence of antigravity is purely theoretical, as the existence of a “gravity” particle have never been discovered. The reason for this is because there is probably no gravity particle, because there is probably no such thing as Newtonian or relativistic models of gravity.

Quantum physics does not allow for the existence of Newtonian “gravity”, and it is well-accepted that quantum theory and relativistic models of gravity are in conflict. Moreover, I theorized years ago that gravity on a planetary scale can be explained by the intense interactions of subatomic particles. 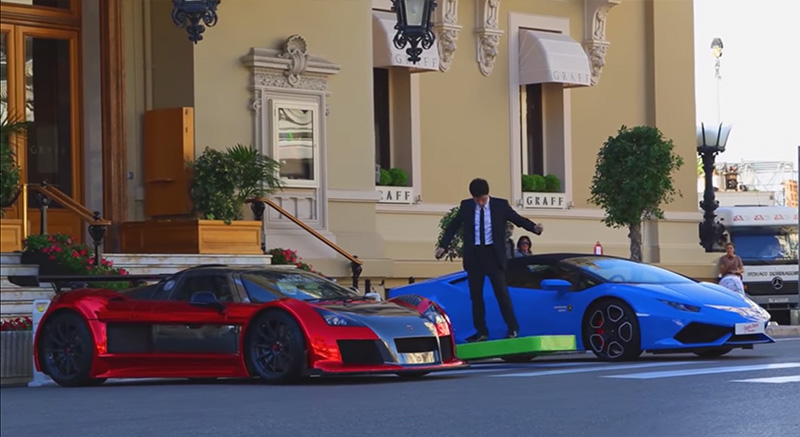 Gravity on Earth (Newtonian gravity), as opposed to planetary gravity (relativistic gravity), can easily be explained by atmospheric pressure (the weight of the air). If this is true, then antigravity could never power a hoverboard, because in this case antigravity is not a real thing, if gravity is also not a real thing. You cannot have the opposite of something which does not exist. However, this does not dismiss the potential although unlikely discovery of new subatomic particles which interact differently to give us the effects of what antigravity could be conceived to achieve.

It is very important to consider what exactly “gravity”, or the effects that we call gravity, really is, in order to defy it. If Newtonian and relativistic gravity does not really exist, then the only possible source of new information that science currently allows is within the realm of quantum mechanics. 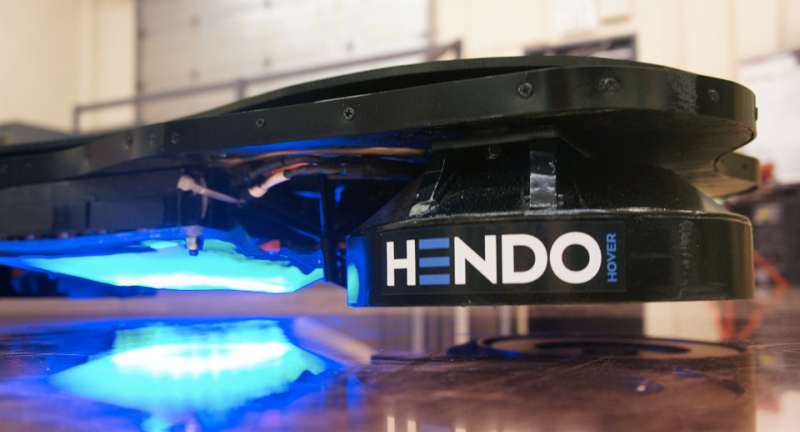 The Hendo hoverboard costs $10,000 and is a true hoverboard. Again, like the others it uses air. They installed a neon light underneath to make it look even cooler.

Does quantum mechanics offer any potential solutions? Well, upon understanding quantum theory one discovers that traditional meanings of up, and down, and here, and there, no longer function. Therefore, theoretically if this disorder and defiance of traditional Newtonian physics could be harnessed, then certainly quantum mechanics could be used to develop a vehicle that could defy gravity.

However, if so, we are still a ways off from developing such a technology, or even from understanding quantum mechanics enough to even begin to develop such a technology. Even so, with current advances in technology growing at such a rapid pace as it is today, it could well be that advances that allow us to defy gravity once and for all utilizing quantum mechanics is not too far away, if it can be used for that. 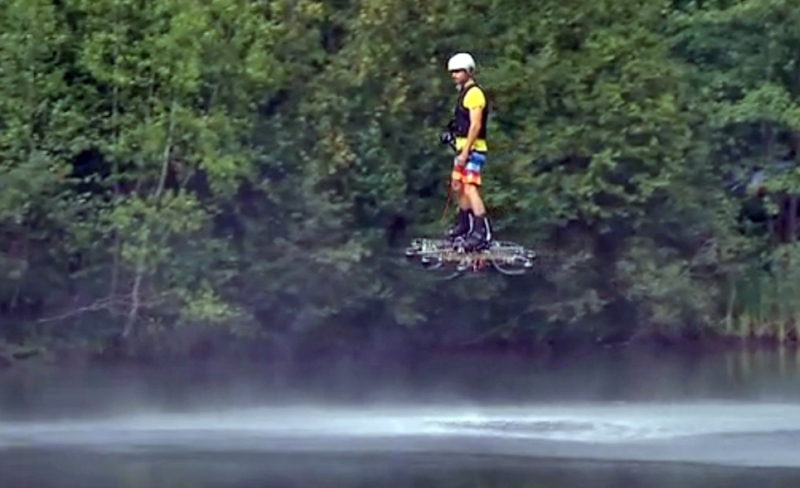 The Omni hoverboard is another true hoverboard, using air for lift. It goes higher than the others.

Another possible means of creating lift that I can conceive of might be some sort of combination of gyroscopic motion and an intermittent localized electromagnetic pulse. What I am suggesting does not exist, I only just thought of it. Basically I am proposing that somehow possibly the energy from an electromagnetic pulse (EMP) could be focused in one direction (down) to provide enough force to create lift.

Perhaps there could be hundreds of holes on the bottom of a device (hoverboard, hoverbike, etc), each which emits a localized EMP aimed down and in the direction of movement. Think of it like bouncing a ball. You throw a ball down, and it bounces back up. The idea is that multiple very powerful micro-electromagnetic pulses could be directed at the ground and could somehow reflect off a solid surface and bounce back up, and if enough energy is involved then it could provide lift.

This of course is purely theoretical and there is no evidence that such a thing is possible. There isn’t even any existing evidence that you could direct an EMP as I have proposed. Then, even if it was possible, there is the issue of powering these powerful electromagnetic pulses. Batteries are very heavy, and enough battery power to actually power the device works against itself, since the batteries also need to be lifted. Therefore an alternate means of power would need to be invented to power this hoverboard. 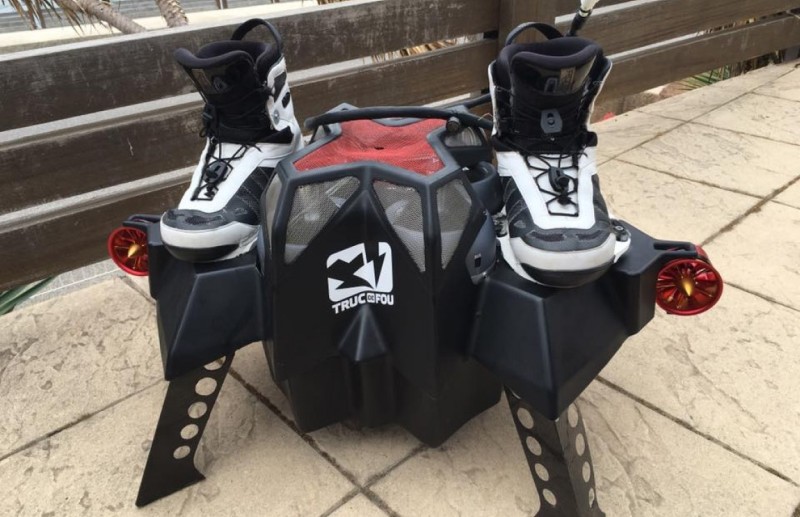 The Flyboard Air is another high-flying hoverboard using four air turbines and with built-in boots. Making the boots detachable might be more practical.

Technically, “real” hoverboards do exist, but they use either spinning propellers to blast air downward to achieve lift, or they utilize magnetic levitation and superconductors and require a track to be built into the ground. While these can be considered a real hoverboard, as in there are no wheels or anything touching the ground, only the air-powered hoverboards are practical as transportation. However, not only are they very expensive, but having high powered air shooting at the ground can cause issues when considering it as a viable means of transportation. For example, you could’t really use it in the desert unless you wanted to fly through a continuous sand cloud.

How about other means of achieving hoverboard levitation that can be achieved today? Is there any hover technology that currently exists that could create effective levitation for a hoverboard without the use of propellers or a magnetic track to run on? Not quite. Without a track, either above or below, or a literal cushion of air caused by spinning propellers pushing air, currently there is no other existing technology that can be used to provide levitation.

However, do not fear. With even large companies like Lexus experimenting with levitation technology, it is not inconceivable that true hoverboards and levitating vehicles are within the realm of plausibility within our lifetimes. Let’s just hope we live to see them take off.

2 thoughts on “On The Plausibility of Hoverboards | Do Real Hoverboards Exist? Is Levitation Technology Real?”

Windows 11 Pros & Cons – Is It Worth Upgrading To Windows 11 If Your Computer Supports It?

The Oculus Rift Will Come At A Hefty Price. Is It Worth IT?