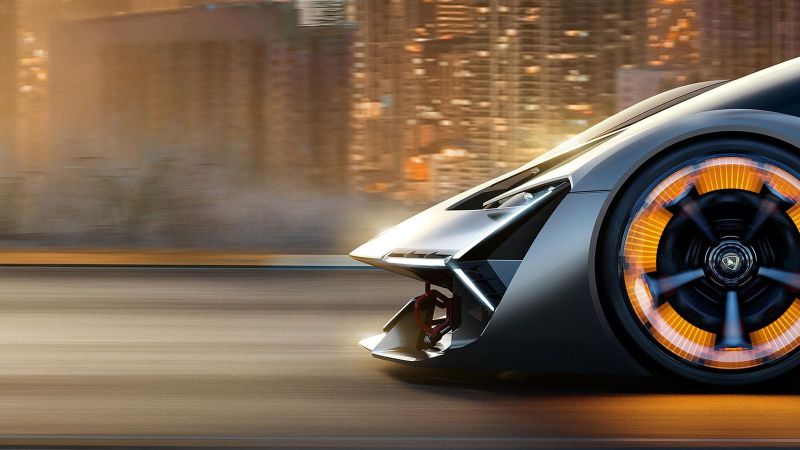 Tesla’s all-electric sports car and Volvo and BMW’s self-driving cars may be left in the dust by the radical level of ingenuity and limitless ambition of Lamborghini. People have been impressed and awed by the powerful innovation of the latest self-driving and self-parking cars and Tesla’s new all-electric semi truck, but Lamborghini’s new self-healing Terzo Millennio concept supercar is in another league.

With a brand new technology which is still under development, Lamborghini aims to develop a working prototype utilizing supercapacitive carbon fiber. With built-in micro-channels, the Lamborghini Terzo Millennio could potentially heal itself when it encounters micro-cracks and damage using its automated health-monitoring systems and special chemicals.

Of course, Lamborghini spared no expense in creating one of the most beautiful, innovative, and aggressive bodystyles ever created, as well as aiming to design wheels that contain electric motors inside every wheel to further dramatically reduce weight, increase torque, and allow more flexible aerodynamics and fabrication. This system could also potentially reduce power usage over a conventional drivetrain, as well as increasing handling response and fully utilizing a fully electric system. 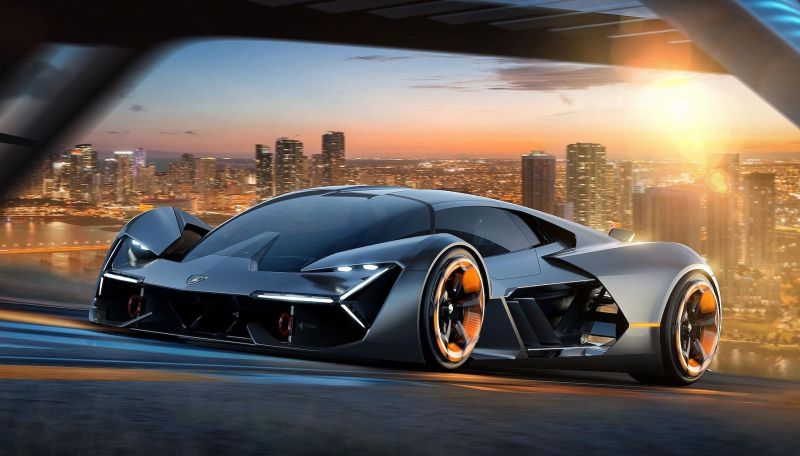 There is only one catch. Lamborghini has teamed up with MIT to create this fascinating new self-healing automotive technology, but while there is promise it could exist, the technology does not quite exist yet. Moreover, it is not the type of self-healing you may be thinking.

When you first read the headline, “self-healing”, you probably imagine sci-fi movies where a car could regenerate its body from accidents or other damage like Knight Rider, so it is impervious to any sort of structural or cosmetic damage. This is not quite what the Lamborghini designers had in mind. Rather, the idea is to create a technologically futuristic supercapacitor carbon fiber shell that literally acts as a battery, and which contains micro-channels which can automatically detect micro-cracks and damages in the shell and repair them automatically using a healing chemical stored in the channels. Presumably, this would be necessary to maintain the integrity of the supercapacitor shell in order to ensure it remains a continuous, unhindered power source.

So this does not mean that the car would be impervious to damage, unfortunately. However, if the technology is successfully created, it would indeed put this form of carbon fiber worlds ahead of any other carbon fiber supercar in existence today; because with self-healing capability, the Lamborghini Terzo Millennio will be more structurally sound and last longer than ever before thought possible by current science. 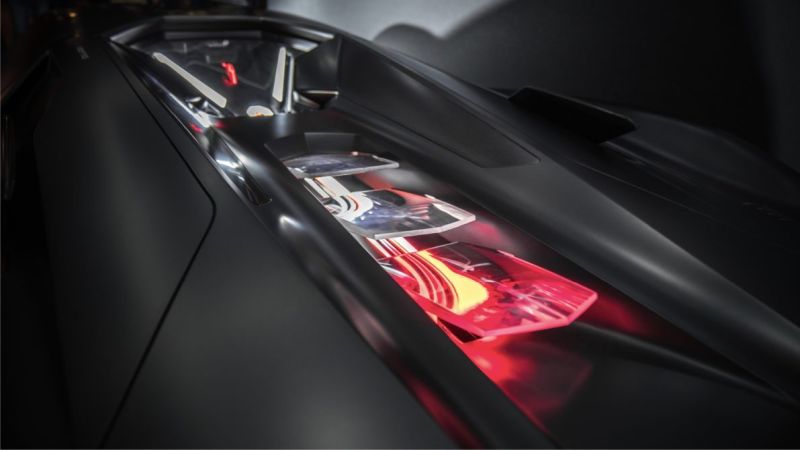 While there is a real, physical concept of the Lamborghini Terzo Millennio which has been driven on the road, this concept only contains a normal carbon fiber shell, and does not have any sort of healing capability. We know this because the technology does not exist yet. It could take years or even decades to develop such a technology, but it is certainly plausible it could be done, else Lamborghini would not be so audacious as to team up with MIT to develop such a solution. Moreover, it is unlikely that this car will ever be released for production, because it is primarily used as a concept vehicle for testing purposes.

It is likely that the reason this self-healing idea even came up in the first place is because Lamborghini engineers were looking for a way to utilize supercapacitors instead of batteries as a power source for an all-electric Lamborghini. Supercapacitors do not have the problems like heat and a limited lifespan that traditional lithium-ion batteries have, like the batteries found in Teslas and the BMW i8. Supercapacitors are found in today’s electric and hybrid cars; but due to the power limitations of existing supercapacitor technology, they are only used for small functions like starting the car. 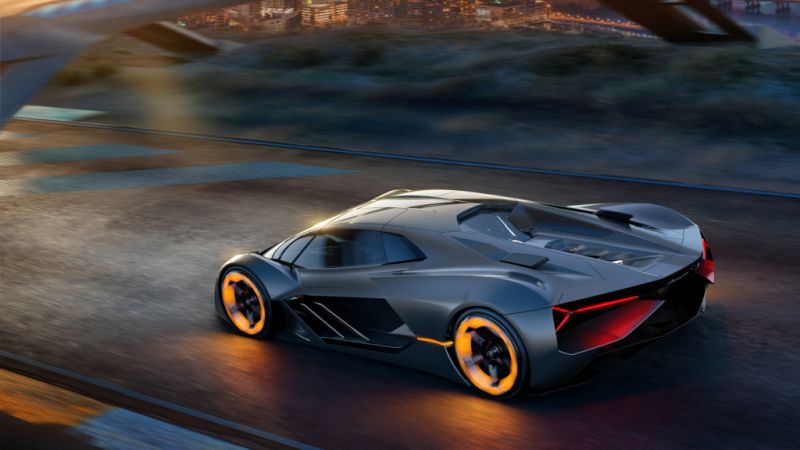 Lamborghini’s idea was to turn the entire carbon fiber shell of the Lamborghini Terzo Millennio into a power source as a supercapacitor, so effectively the entire car functions like a battery. While such technology does not exist yet, Lamborghini is hopeful that they can create it. If they succeed, it may solve a potential problem in which micro cracks in the carbon fiber body could hinder the current flow and thereby reduce or even terminate power to the vehicle, over time.

High quality carbon fiber, unlike the kind found in cheap eBay parts, is incredibly rigid and strong – many times stronger than steel, as has been shown in many tests and demonstrations like this one from the Lotus F1 test facility. The problem with carbon fiber is that unlike steel, it has a low unidirectional tensile strength. Think about it like this. Imagine you have a dry stick from the woods. If you try to pull it in half, it is incredibly difficult. It is probable that no human has such strength, even for a small twig. Conversely, it is quite easy to just break the stick in half. Carbon fiber has the same problem. Because of this, carbon fiber is designed in a mesh pattern weaved in many directions to increase its strength by laying a pattern that makes it strong in every direction. However, even then, this weakness could result in micro-cracks in the shell over time.

Standard vehicles which only rely on the body primarily for cosmetic purposes would be fine with micro cracks as long as it maintained structural rigidity. But a carbon fiber shell which also functioned as a supercapacitor could perhaps run into problems, as these micro cracks may inhibit the flow of electric current. This could be why Lamborghini came to the potential solution of self healing capability, to mitigate this potential issue. If the supercapacitor carbon fiber shell is the primary power source, then it is critical to have a way to ensure its integrity on a micro-scale to ensure that it remains a reliable power source. 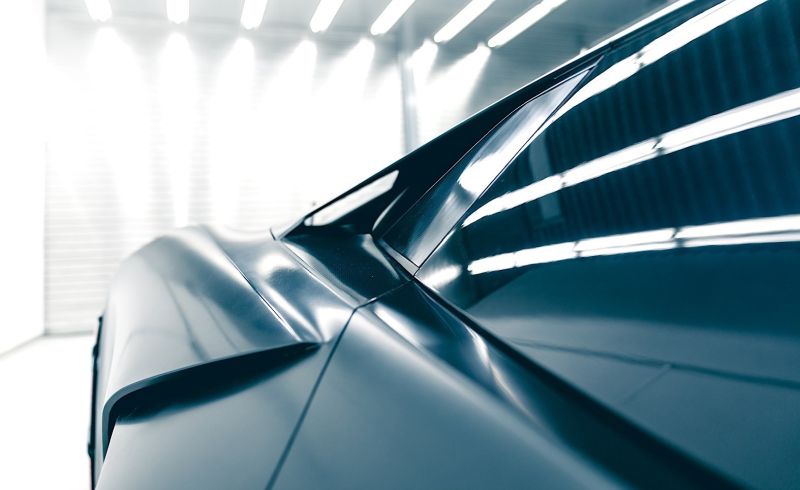 Much of the greatest everyday automotive technology we have today, including automatic transmission, ceramic disc brakes, and push button start, originally came from Formula 1 racing and supercars. So while this new Lamborghini Terzo Millennio concept introduces the possibility of self-healing on only a micro-scale, it is certainly possible that one day on the future, it could lead to the development of the type of Knight Rider self-healing that many science fiction fans have dreamed of. It may not be next year or next decade, but possibly in our lifetimes. That will be an amazing day.

If Lamborghini is successful in creating this self-healing technology, as well as the capability to transform a carbon fiber body into a supercapacitor as a primary power source, this could have revolutionary implications for the electric car industry. The current limitation of electric cars, no pun intended, is that batteries are heavy, have limited power, are volatile, get hot, and lose capacity over many recharge cycles. A carbon fiber supercapacitive body could solve all of these problems: it is extremely lightweight, has an extremely long lifespan, does not get hot, and if effective could store far more power in far less weight than any conventional battery.

Nearly every component of a car, from the body to the axels to the dashboard, can all be made out of carbon fiber, making the entire vehicle capable of being used safely as a power source for an electric engine. This would mean that the primary drawback of electric cars, which is short driving distances before needing a recharge, would be a thing of the past; and production costs due to having no on board batteries would possibly be low enough to implement it affordably into even low-end entry-level vehicles. 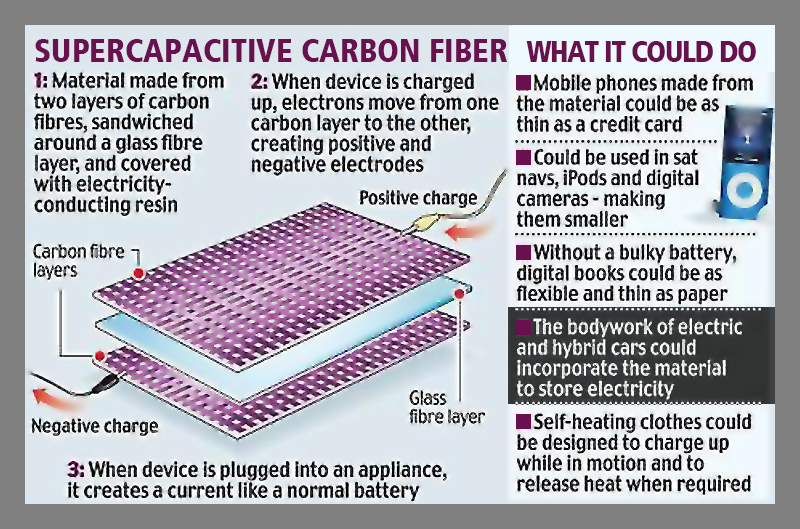 Tesla recently released the beautiful Model 3, the first decent-looking and affordable all electric vehicle, at only $35,000 for the base model. And Tesla’s solution to the tedious charging is to add bigger batteries so it is on par with gasoline refills, and speed up charging times to be at least equal to filling up a gas tank. While somewhat effective, these are only temporary solutions, because what is really needed is a better battery, something that has only marginally improved in the last 50 years. What the world needs is a revolution in battery power. This is one of the greatest unanswered problems of the technological age, with quadrillion-dollar implications.

The idea for supercapacitive carbon fiber is not particularly new. Nearly a decade ago in 2010, British scientists were the first to prototype working carbon fiber supercapacitors. Specifically, they mentioned the capacity to utilize this material in electric vehicles and other devices. Still, it is certainly innovative for Lamborghini to come up with the idea of using the entire shell as a supercapacitor, Additionally, Lamborghini’s active efforts to implement it could be the element needed for this technology to enter the consumer market.

Supercapacitive carbon fiber could be the big solution everyone has been waiting for. If Lamborghini succeeds, the implications could reach much further than merely the automotive industry. If the technology is successfully created, then one day cell phones, laptops, and many other battery-powered items could one day utilize supercapacitive carbon fiber instead of batteries, making them more lightweight, slimmer, last longer, and not get hot, thereby also increasing devices’ performance capacity. The problems with electric cars are also very similar to the problems with battery-powered mobile devices, so solving the global battery problem with supercapacitive carbon fiber could transform the automotive and electronics industries at a fundamental level, and truly change the world.

It Is Scientifically Possible To Physically See Back In Time, In Real Time

PS4 Slim and PS4 Pro Are Both Now Released, But Will You Really Want To Buy One?