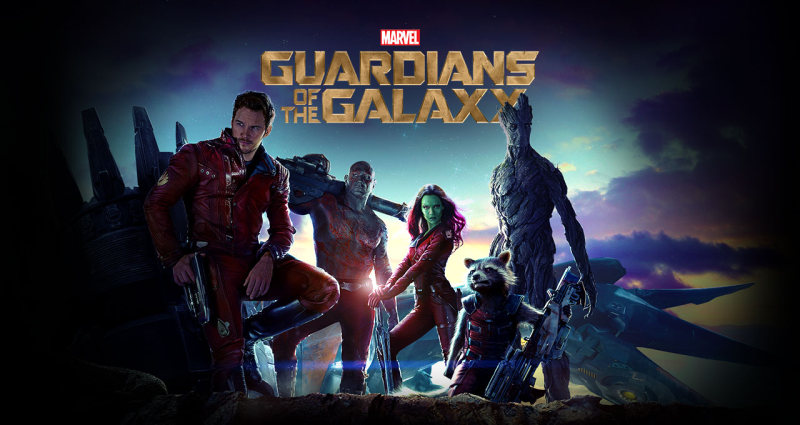 Marvel and DC seem to just be throwing movies at us nowadays. From Batman to Superman, to Green Lantern, Spiderman, Hulk, The Avengers, and even Thor, a lot of these comic book superheroes are blowing up in the big screen and are getting excellent ratings, especially from comic book fans.

One of Marvel’s more obscure superhero groups, The Guardians of The Galaxy, has been adapted into a movie which was written and directed by James Pratt, who had previously made the two Scooby Doo films as well as Dawn of The Dead. The movie features Chris Pratt who plays Peter “Star-Lord” Quill, Zoe Saldana as Gamora, Dave Bautista as Drax, Vin Diesel voicing for Groot, and Bradley Cooper voicing for Rocket Racoon.

Guardians of The Galaxy tells the story of Peter Quill, our overly confident thief-adventurer-protagonist, who gets in possession of a very mysterious and powerful ancient orb. Unbeknown to Peter, the orb is also sought after by the main villain, Ronan. In an attempt to stop the powerful Ronan from destroying the entire Galaxy, Peter bands together a group of criminal mavericks who push away their past to team up to thwart Ronan’s plans.

One thing that stands out about the film is how much it has paid homage to two of sci-fi’s most classic series, Star Wars and Star Trek. From it’s brightly colored humanoids much similar to Star Wars’ Twi’lek species to the subtle facial formations that Star Trek was known for. The film even has an intense space battle. Couldn’t get any more classic Sci-Fi than that, now, can you?

Although the movie did lack in the CGI department at some times, the space set design is spectacular. There were many shots of realistic colorful nebulae that would put the viewer in awe and give them a sense of wanderlust. There were very few CGI characters, but those that were (namely, Groot and Raccoon), fit well in the environment and were convincing enough.

The villain’s ambitions were a bit overshadowed by the main characters, but, the Guardians were so likable that it didn’t even matter. Chris Pratt’s Peter Quill is played as a very modern anti-hero in the style of Han Solo, and, let’s face it, everyone just absolutely loves a good anti-hero.

Although, what seems to be the fan favorite is the character Groot, the strange humanoid tree who is partners with Rocket. Groot’s naive gentleness makes him the group’s odd one out and his single line, “I am Groot”, sort of establishes a simpleness that is often needed in everyday life.

What might go over some of the viewers heads about this film is it’s very cause-and-effect plot line that seems to drive the entire film into place. The 5 main characters of the film were brought together through a common and yet very different set of goals not by chance, luck, or fate…but merely by their circumstances, albeit, at the same time, seemingly by some natural force. It’s this very cause-and-effect heavy plot that ties the whole film together and makes it seem full.

Here is the official trailer for Guardians of The Galaxy (2014):